In the antiquity, the course of the River Maeander was used mostly as a trade route. This course carried the trade volume from inland to the port of Ephesus. In the Byzantine period, this route was used for purposes of communication with the high lands of the South. The road, which begins in Ephesus, reaches to Hierapolis (Pamukkale) via the River Maeander. Turning to the south (towards the town of Cal), the road leads to the Lycos Valley. This road was widely used by the people travelling from Ephesus to the East in the Christian era.

Hierapolis in the Lycos Valley enjoyed its golden ages in the . 2nd and 3rd Centuries A.D. Apparel woven in this city was exported even to Italy (Photo 1 - 2), and close commercial ties were also established with the Western Anatolian cities (such as Ephesus, Pergamum, Symirna, Sardes, Aphrodisias, etc.) and common coins were circulated. Hierapolis can be considered as an industrialized city of the antique age with its manufacturing and dyeing of textiles and weaving of carpets and rugs. This production was carried out together with the other cities in the Lycos Valley, namely Laodiceia and Colossai. 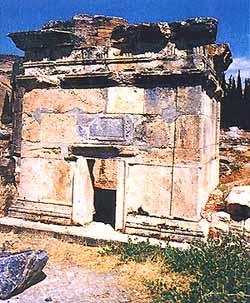 Photo 1
The Mausoleum of Flavia Zeuxis in Hierapolis.

Photo 2
Inscription detail from the Mausoleum of the merchant Flavia Zeuxis (1st Century A. D.). Here Flavia Zeuxis tells that he took woven products (carpets, rugs, cloths etc.) manufactured in Hierapolis to the port of Ephesus and sent them by ship to Mediterranean countries. He also tells that he visited the Malia cape in Italy 72 times.

In Laodiceia, the giant textile city of the antiquity, the spread of Christianity was very slow. The reason for this was the affluence acquired by the city through trade and textile. The rich and prosperous people of the city were not interested in a new religion initially. In the whole antique world, especially the wealth of the Polemos Dynasty was on everybody's tongue. The main source of this wealth was a species of sheep with raven black colour bred in Laodiceia and woven textile products made of the wool of these sheep as well. Strabon, the antique geographer (XII / VII - 16), wrote that a species of sheep with raven black colour and soft wool was bred in Laodiceia, and the wool of these sheep were much superior to even those of the sheep bred in Miletos (Balat), and that Laodiceians obtained great wealth due to that. Vitrivius, the antique author (VIII / III - 14), attributed the softness of the sheep wool to the rotten smelling water they drank.

The tunics, which were woven in Laodiceia and called Trimitia, were famous to the extent that the city was once known by the name "Trimitaria." The best textile products of the antique ages were woven in the Lycos (Curuksu) Valley. Woven fabrics excelled even those of Miletos (Balat). Textile products woven here in the 4th century B.C. were gathered in Sardes (Salihli) and distributed from there. In the antique age, the cities of Caria and Lydia competed with Laodiceia, Colossai and Hierapolis in the textile industry. The washing, and dyeing of the wool in the Lycos Valley had become an important industrial sector.

In this part of the world, the most important industry in Ionia, Lydia and Phrygia was the production of textile fabrics. The whole of Miletos, which was Ionian port city, Hermos (Gediz), and the cities in the Maeander water basin, Sardes (Salihli), Thyateira (Akhisar) in Lydia, the considerably important Colossai; Hierapolis and Laodiceia in Phrygia were economically dependent on the Aegean port cities.

In the classical age, the quality and softness of the wool of the sheep bred in Miletos had acquired an important and privileged reputation in the antique world. In the 4th and 3rd Centuries B.C., woven fabrics made of Miletos wool were a symbol of privilege and quality. The sale of non-standard, second quality wool was banned by law in Erythrae (Ildiri) in the early 4th century B.C. And at the end of the century, wool bought from Miletos was used in the manufacture of cloaks and overcoats in Theos (Sigacik). Sardes and Thyateira (Akhisar), the Lydian cities, had acquired great fame for textile production. The wall covers and dresses woven here were named Attalic by the Romans. According to certain antique sources, this name was a trademark for the textile products manufactured for the king's palace in Pergamum.

The Ionian and Lydian cities were competitors of the cities of Hierapolis, Laodiceia, and Colossai in the Lycos Valley. The bright black coloured wool produced in Laodiceia was more famous than the wool produced in Miletos especially from the point of view of softness, and the source of the wealth of the city was mainly due to this. Laodiceia had great reputation especially for its ready-made garment industry in the antique age. The cloth manufactured here was used to make fashionable ready-made clothes to cater for the taste of consumers. One of the most important ready-made clothes centres of the antique world was Laodiceia.

Not only wool workers but also carpet weavers and purple violet wool dyers had set up guilds in Hierapolis. The thermal city water with high content of lime was used a lot for purple violet wool dyeing. The wools dyed with dyestuffs obtained from red roots were recognized everywhere by their purple colour.

The main factor behind the prosperity of the Phrygian region can be explained by the great development of the textile industry in the coastal cities of the Lycos Valley and the wealth obtained from land. The trade volume was really at an active point in this region at the antique age. The source of this wealth was the coloured marble obtained in Thiounta (Gozler), copper works of Hierapolis, sweet vines obtained from the vineyards around Dionysopolis (Cal - Ortakoy).
As mentioned above, the main source of the wealth in Denizli and its surroundings in the antique age was textile and the trade developed around it. The province of Denizli owes its worldwide success today to its deep-rooted past of 2300 years. The people of the valley had its golden age in the antique world since the Hellenistic period (3rd Century B.C.).

The primary source of the raw material for textile industry were wool and silk in the antique age. The softness of the wool coming out of the sheep bred at the foothills of Buldan, Tavas, Acipayam, Babadag and Laodiceia was famous in the whole antique world. The dyeing and weaving of the wool and manufacturing ready-made garments had become an industrial sector in the region, and mass production had already started. The antique cities of Trapezopolis (Bekirler village), Attouda (Hisarkoy) on the foothills of Babadag, and other antique cities of the Lycos Valley such as Tripolis (Yenicekent), Laodiceia (the villages of Goncali and Eskihisar), Colossai (Honaz), and Hierapolis (Pamukkale) had formed a union for the purpose of transporting textile products they manufactured directly to the port of Ephesus and exported by ship to the whole antique world, namely to the island of Samos (Sisam), Athens and Italy without involving any intermediaries. Such evidence suggests that one of the World's first active stock-market was found in Laodiceia. In the antique age, the mass production of ready-made clothes had initially started in the Lycos region. Ready-made clothes reflecting the fashion of the age in the region had become so widespread that even the Roman palace in the A.D. 2nd and 3rd Centuries were clothed by the people of the region. Buying and wearing clothes manufactured in the Lycos Valley had become a symbol of prestige and privilege at the time. The tombs of the deceased people were even decorated with carpets, rugs and cloths woven in the cities of the Lycos Valley. The weavers' guild set up in the region was the stock-market of the time. According to the bylaws of the stock-market, it was strictly banned to make clothes out of second quality wool and to manufacture ready-made garments out of second quality clothes. People making such fraudulent production were not allowed to join the stock-market. Thanks to the quality of the production, the cities of the valley attained a high level of prosperity. The wealth was so abundant that although the cities of the valley were all devastated by the earthquake of the year 60 A.D., they were able quickly to be rebuilt.

The region became prominent with respect to religion during the Byzantine era. It continued to be well known for textile manufacturing especially in the Ottoman era as it once did during the antique age. The fame of the woven fabrics of Babadag, Buldan and Kizilcaboluk spread everywhere. Even the Ottoman palace preferred Buldan fabrics and the shirt of Genc (Young) Osman had been made there. 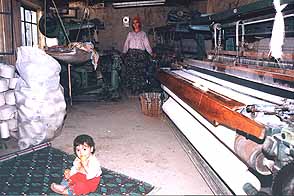 Photo 3
Daily life in Attouda (Hisarkoy), mother and son and the loom, an inseparable part of life .

The livelihood of the towns of Buldan and Babadag and the borough of Kizilcaboluk situated at the foot of the Salbacos Mountain (Babadag) depends on the textile production today as it did in the antique age. In these settlements, textile means life and a never changing daily way of living. The rhythmic sounds of the looms which start early in the morning, a touching folk song, a sad ballad, mix up as if the whole thing forms up a symphonic orchestra. A baby begins to hear these sounds while in the womb of his or her mother and it later becomes a philosophy of life and continues for the rest of his or her life (Photo 3). This source of production stems from its past going well into the history. F. Sarre, the researcher who passed by the Lycos Valley in 1895, described the captivating landscape of Babadag as it were an oil painting. Even today, Babadag has a really comforting and peaceful atmosphere, with its plateaus, valleys, waters and flora all shade of green.
The region is therefore suitable for mountaineering and high country tourism. In his notes, Sarre tells that the fabrics of Buldan, with a population of 8,000 at the time, were admired everywhere, and that the livelihood of the people depended on weaving. The clothes were made of wool, and silk was stretched inside, and bands were made with yellow silk thread. Sarre failed to visit the town previously named Kadikoy (Babadag) on the foot of Babadag. Had he visited, he would have seen textile fabrics such as those in Buldan and looms in every house.

Ramsay, who carried out a detailed research in the cities of the valley between 1883 and 1886, writes that, although Laodiceia was the centre of the textile industry in the antique age, it was later replaced by Kadikoy (Babadag) and Buldan. Ramsay mentions that weaving was carried out in the looms at every house in Kadikoy (Babadag) (see Photo 4). The observations made by Ramsay 115 years ago were indeed correct. In contemporary Denizli, the main textile centre is Babadag, followed by Buldan and Kizilcaboluk. However, textile manufacturers have gathered in organized industrial districts and carried out production in large factories and exported their products to the world at large as their predecessors did in the antique age. There is no doubt that we will be able to find various remains and documents in the excavations we plan to carry out in the antique textile capital Laodiceia. We already believe that the entrepreneur businessmen of Denizli will give us their support. 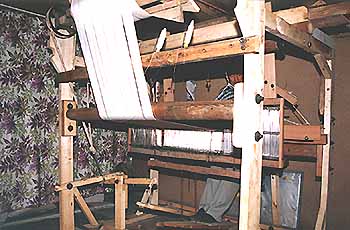